Watertown has been home to Dale and Diane Christensen since 1988. As a wealth management specialist and charitable planning professional, Dale was instrumental in assisting others to establish funds at the Watertown Community Foundation.

“We could only imagine – back in the beginning – that the Foundation would grow to $14 million and distribute nearly $5 million for charitable purposes over the last 34 years,” he said. Dale believes the Foundation will and should continue to grow more funds established by businesses, professionals, families and neighbors.

“That’s kind of why I set up a fund,” he said. “If you want someone to do something, you better set an example.”  They also raised a daughter and son here and thought it was a good way to give back to the community, he said.

The Dale and Diane Christensen Fund was established in 2004.

Dale was one of the first trustee representatives for the Foundation and has worked or volunteered with the Foundation in one way or another for much of its 35 years. He is a past chairman and current board member.

While the Christensens set their fund up for unrestricted educational, cultural, charitable and benevolent use; some donors have decided to designate their funds for particular needs.

That is the beauty of setting up a fund at the Watertown Community Foundation.

“It’s a simple one-page agreement and it’s easy to focus it toward your passion or just general needs,” he said. “It’s even easy to change it, if in the future, you choose to do so.” Likewise, you don’t have to start with a minimum gift. While funds don’t start paying out scholarships or grants until they reach $10,000, that doesn’t mean the fund can’t be established with a smaller amount. A person can contribute yearly or fully fund at any time, which could include a contribution designated from a will or insurance policy.

There are many good reasons to establish a fund, Dale continued. “I also like knowing that our name will always be connected to the Foundation and its good works.” 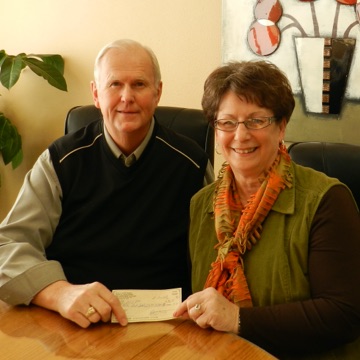