People, places and experiences can all leave an impression.

For Fern Williams and her husband, Darwin (now deceased), the Watertown community made an impression. Though neither graduated from Watertown High School, they spent enough time in Watertown to truly appreciate the town, the people and the experiences they had here.

It was Darwin who was born and raised here. However, before graduation he went into the Navy and then World War II began. Fern came to Watertown as a first-grader, but also left Watertown at approximately age 18. Regardless, Fern will never forget Watertown or the early years.

“I didn’t know normal,” Fern explained. “I never had a birthday party. We never owned a house or a car.”

They were very poor, but looking back, Fern says she wouldn’t change it. “I’m glad I was poor,” she said. And, regardless of what material things, you may have, you don’t know what you had until you lose it. “People don’t realize that people who haven’t had a lot have just as hard time spending money as someone who spends a lot and tries to stop,” she continued.

“I’ve had a lot of time to think,” the 90-year-old said. “I’m not judging others, but I believe money should be used to help people.” Whether that be near her California home – she plans to assist disabled veterans there; or elsewhere.

“We were very fortunate,” Fern says of her and Darwin’s success. Beginning with little money or education, they faired very well. She credits the Lord and gives Him thanks for their good fortune. They were happily married for 67 years, though in later years Darwin’s health failed. Darwin passed away 2 ½ years ago.  The couple lived in 12 of the United States and was widely-traveled. No matter where they traveled, they always made visits back to Watertown to visit family, friends and the community.

It is to Watertown, she says, that she has already started “giving back” in more ways than one. The couple established the WWII Memorial Scholarship Fund at the Arrow Education Foundation nearly 25 years ago. She has a charitable trust through Lutheran Brotherhood which supports Joy Ranch; and has recently created the Darwin and Fern Williams Memorial Fund at the Watertown Community Foundation to benefit children and the elderly.

“I might live in the city now, but I’m still a small town girl,” Fern told the Foundation. “It gives me great happiness to know my gifts will continue to help others for many years to come.”

Darwin and Fern Williams loved their hometown of Watertown so much that no matter where they landed, they always looked forward to adding a little mileage on their latest vehicle to travel back to visit friends, family and the community. They lived in 12 of the United States but still referred to Watertown as “home”. Coming back and giving back to where it all began was important to them and their latest gift underlines that. A bequest of approximately $675,000 to the Darwin and Fern Williams Memorial Fund at the Watertown Area Community Foundation will continue to give back to the home they loved forever.

The Williams’ love affair with Watertown and as a couple began when they were young. They were Watertown High School sweethearts and husband and wife for 67 years. Darwin passed away in 2011 and Fern just this year.

They were both very sweet to one another, reminisced Jean Jenson and Christina Planteen, the couple’s niece and great niece. When Darwin got diabetes, Fern learned everything she could about healthy eating. She took very good care of Darwin, and he was glad that she did, they smiled. And when they traveled, one of the things Fern liked to do was meet people. Darwin wouldn’t care how long she visited – he just waited patiently.

Both Darwin and Fern came from poor backgrounds. “I’m still a small town girl and I’m glad I was poor,” Fern told the Foundation when she established the fund in 2014. “People don’t realize that people who haven’t had a lot have just as hard of a time spending money as someone who spends a lot and tries to stop.”

Jenson and Planteen confirmed that Fern and Darwin watched every penny in their daily living with groceries and such. Once in a while they would splurge like when it was time to buy a new car. Perhaps it was because they spent a lot of time in their car traveling to interesting places and back home. Fern, who would have been 94 Sept. 20, even named her cars. She took time to select that just- right automobile as well as how else to spend her dollars.

“I’ve had a lot of time to think,” Fern said. “I’m not judging others, but I believe money should be used to help people.”

The couple will continue to do that in many ways. Beyond the Fund, other gifts to home from the Williams include scholarship funds at Arrow Education Foundation and assistance to Joy Ranch. Fern named Planteen the advisor for the Donor Advised Fund designated to benefit children and the elderly. Planteen said she looks forward to the task and takes her job seriously. “I know it’s very important to make sure it’s going to someone or something that really needs it,” she said, acknowledging the couple’s wishes and passions.

Fern’s passion for home never faltered. Until just a few years ago, Fern would always say she planned on traveling back, Planteen and Jenson said. She would grab her St. Christopher medal and say, “’I just take one mile at a time.’”

Through careful and generous thought, Fern established the Darwin and Fern Williams Memorial Fund - a vehicle with no final destination. Rather than one mile at a time, this vehicle will enable the couple to help others one grant at a time for generations to come.

REMINISCING – Jean Jenson and Christina Planteen reminisce over photos of relatives Darwin and Fern Williams, now deceased. The Williams left a bequest of approximately $675,000 to the Watertown Area Community Foundation to support the Darwin and Fern Williams Memorial Fund to benefit children and the elderly. Planteen will be the advisor for the Donor Advised Fund. Fern would have been 94 Sept. 20.

ONE MILE AT A TIME - Darwin and Fern Williams made many trips back home to Watertown. Their preferred mode of transportation was on motorcycle. Then in later years, it was their automobile. 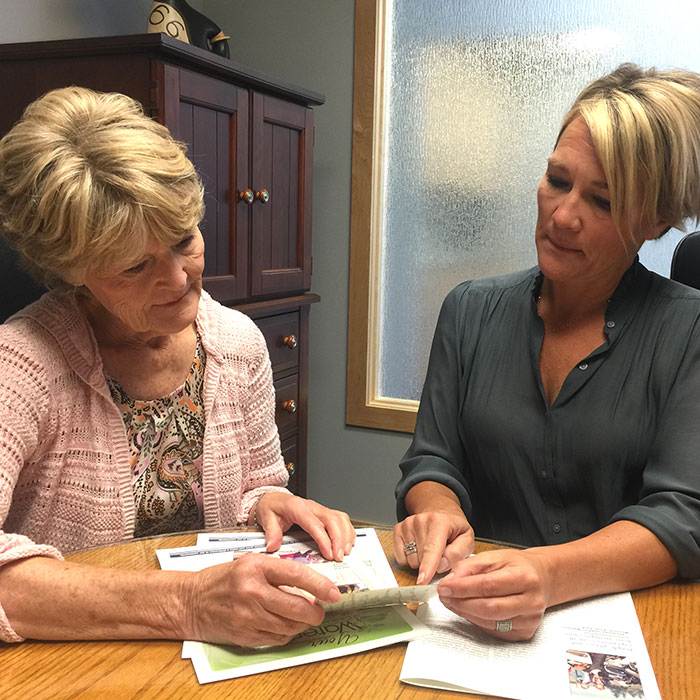