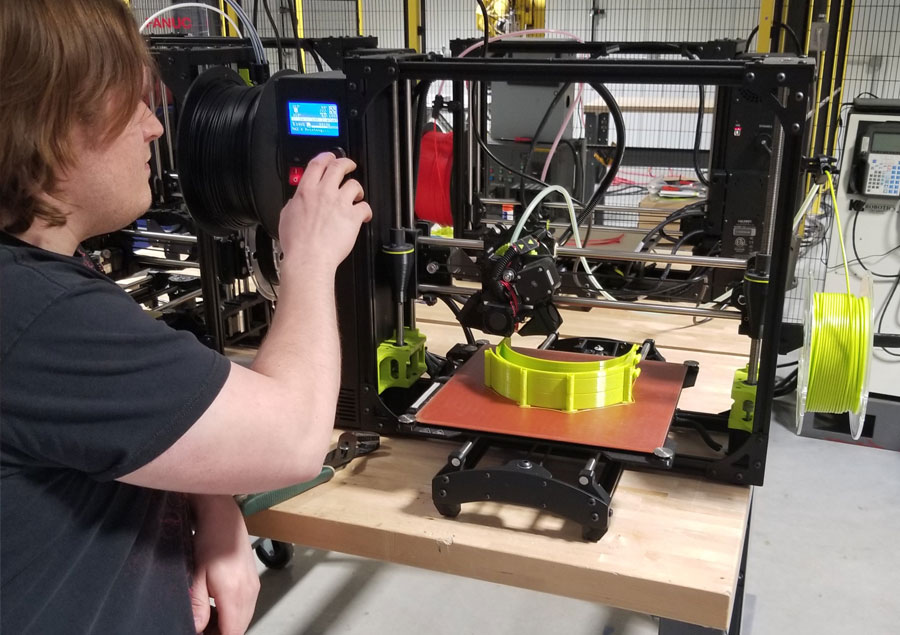 “Relief” is just one of the positive results offered through grants from the Watertown Relief Fund since it was established in March by the Watertown Area Community Foundation.  The fund’s purpose is to support organizations and charitable groups in their efforts to serve others during COVID-19.

To date, more than $70,000 has been awarded in grants to those groups. Grants have helped with food distributions, child care for health care workers and first responders, technology for Zoom and other socially-distanced services, 3D printers to create Personal Protective Equipment (PPE), essentials like hand sanitizer and masks… and so much more.

The Foundation heard recently from Mark Iverson, an 8th-grade science teacher at Watertown Middle School, regarding the impact made from one of the first Watertown Relief Fund grants. The grant allowed him to purchase 11 3D printers to print PPE. Initially, he aimed to fill the need locally, then throughout the state. However, his efforts, along with that of Brooks Jacobsen at LATC on other printers provided through a WRF grant, have provided thousands of PPE not just locally but to 17 states.

It was a team effort, Iverson said, mentioning other teachers, JJ Clendenin and Nate Albertson, as well as residents in the community – an effort that didn’t go unnoticed. In many areas, hospitals were completely depleted of their PPEs, he said. Nurses told me when they received our packages of 200 to 300 masks at a time, they would start crying because they were so thankful.

“It’s a little surreal,” Iverson said. “I never thought 3D printing could make as big of an impact as it did… a hobby that I used to make trinkets and toys… would actually save lives.”

The simplicity of a mask made all the difference.

The fact is, sometimes a simple thing like a peanut butter sandwich can also make a difference – at least when it comes to whether a child is going to bed hungry or not.

The most recent grant from the Watertown Relief Fund was awarded as “back to school” is the current reality. The Watertown Area PACH organization has received a $15,000 grant as it prepares for the 2020-21 school year in its mission of providing additional food  over the weekend to students in need.

“We found that because we were unable to do a couple food drives since March due to COVID, we had a shortfall of funds (and food) for the upcoming school year,” explained Lorie Blackwell, PACH vice president. “The grant gave us a huge relief in that we will be able to fulfill the needs of this year.”

Last year, PACH gave food assistance to 538 students coming from Watertown, Headstart, Waverly-South Shore, Florence and Henry schools. Surveys and enrollment forms are currently being collected during the schools’ open houses, to determine this year’s need, but Blackwell is confident that the grant, as well as ongoing support from the community and schools will meet that need.

“PACH is 100 percent volunteer,” Blackwell reminds. “The partnership with the school is great!” We couldn’t accomplish PACH’s mission without either one, she added. Local grocery stores, Feeding South Dakota, and numerous volunteers are key. “It takes about 100 volunteer hours per week to get all the different parts of PACH to work so we are very, very thankful for the volunteers,” she said.

Blackwell encourages those who want to consider volunteer opportunities to look for Watertown Area PACH on Facebook.

PACH has been going strong locally since 2011. “Once school starts, we are typically a well-oiled machine throughout the whole school year,” said Blackwell, adding… “unless you have a pandemic.”