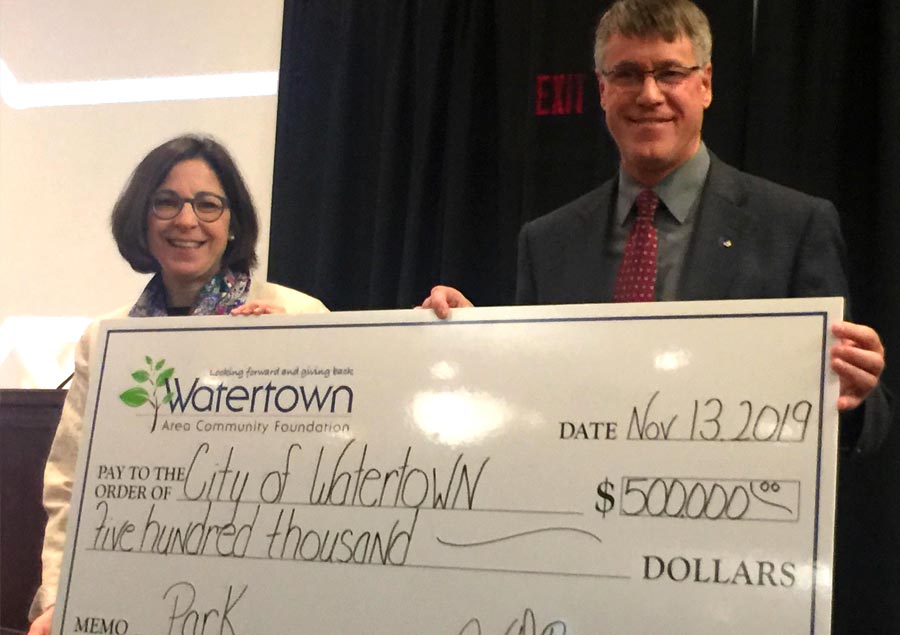 A new park in downtown Watertown is that much closer to reality with a $500,000 grant being awarded to the effort by the Watertown Area Community Foundation. The announcement was made by Mayor Sarah Caron and Foundation Board Chairman Charlie Ewalt at Foundation’s celebratory 40th Anniversary Luncheon.

The decision was unanimous, said Ewalt regarding the Foundation Board’s approval. “Thanks to H2O-20’s community survey, the Board was well-informed of residents’ wishes to focus on Downtown beautification as well as provide a central public space in Downtown,” he said.

The community visioning process, H2O-20, began in May 2012 and included a three-month research project of gathering resident input. The formal Vision Plan that came out of H20-20 developed five key areas with safe and attractive neighborhoods and business districts among them. Through committee efforts and a public charrette, more input and priorities were defined.

“The Foundation was involved with H20-20 from its beginning as a funder and administrator,” said Jan DeBerg, executive director. “The Foundation has been using the vision plan and survey findings to help inform their grant-making, keeping in mind the community ‘wants’ and ‘needs’ identified in the survey.”

“The Foundation has not only supported the City’s efforts to improve downtown, they have partnered every step of the way,” Mayor Caron said.  “This is an extraordinarily generous gift and I am deeply grateful and appreciative of it.  This Community Foundation-funded park will answer a need clearly expressed in our Vision Plan and will raise our quality of life. On behalf of the citizens of Watertown, I sincerely thank the Foundation for making this substantial grant!”

“We’re excited to work on this project with the City and community,” Ewalt continued. “A new downtown park will provide a location to gather year-round for families, employees and downtown business patrons and visitors to the area. This is one more positive step toward providing a quality downtown experience for all ages.”