If philanthropy had a face, we would, no doubt, see Mr. Way’s.

Since the beginning of the Watertown Community Foundation in 1979, Mr. Way and his family have supported the foundation and its mission wholeheartedly. In fact, the Foundation’s mission and the Ways’ personal one reflected each other. Mr.Way was very personally committed to promoting charity, education and culture in our community.

Mr. Way did a lot of both and did so with the utmost sincerity. He supported the Watertown community in a variety of ways, and specifically with the Foundation, his gifts were truly exceptional.

Mr. Way told Jan DeBerg one time, “This town has given me a lot over the years, so the least I could do was try to give some of that back.” He continued, “When I look at Watertown, I see how much it’s growing and how wonderful a town it has become because of the Watertown Community Foundation.”

Mr. Way played a key role in that growth, not only of Watertown, but of the Foundation as well. At his passing, Mr.Way gifted $1.5 million to the Foundation. His philanthropy, vision and passion continue today as his and Mrs.Way’s Fund supports the community. Their passions for the Watertown Community Concert Association, Town Players, as well as the arts, education and human services in general are supported perpetually because of their generosity.

We can all thank Mr. Way for his large part in continuing to make Watertown a great place to live, work and raise a family.

Editor’s Note: The following story was created after the Watertown Community Foundation reminisced with members from the Watertown Concert Association and Carolyn Lubbers, former Public Opinion employee, former WCA president and friend of the Kenneth and Myrtle Way. The Ways and Vera Way Marghab have given countless contributions to Watertown, as well as to many philanthropic areas beyond Watertown’s borders. The following is just one example of their generosity and kindness.

A love of music and of Watertown continues to bring great concerts to the local stage.

It was no secret that Kenneth and Myrtle “Mickey” Way, as well as, Mr. Way’s sister, Vera Way Marghab, loved music and the arts in general. The long-time Watertown residents were active in supporting the arts, both monetarily and by serving on respective boards.

In fact, Mrs. Way was a charter member of the Watertown Concert Association and served on its board for 50+ years before passing away in 1999 at age 93. She loved to play piano and paint. Marghab, who passed away in 1995, was an accomplished classical pianist.

Mr. and Mrs. Way avidly attended as many local plays and concerts as Watertown could offer, including Municipal Band and high school band and orchestra performances.

Then and now, they made sure Watertown could offer exceptional concerts to the general public. Mr. Way passed away in 2006 at age 99.  However, the couple’s legacy, along with Marghab’s, lives on and supports their passions through funds at the Watertown Community Foundation. Since 1997, the funds have supported the Watertown Concert Association on an annual basis. To date, the totals are to the tune of $190,000 and that has the WCA board more grateful than ever.

“Back in the ‘80’s, this group was close to going out of business,” explained Doug Herr, WCA board president. There was an opportunity to get The Canadian Brass, but they cost $15,000. Mr. Way heard about it and ended up paying $10,000 of his own money to help get them here. “That was a turning point for the group.”

Herr said that, in addition to Mrs. Way being on the board, Mr. Way continued to help out financially throughout the years. The reason was simple: “The Ways wanted to make sure everyone in Watertown could afford a ticket if they wanted to go.” The Way and Marghab gifts still allow us to offer that, he said.

“People don’t know that tickets for these concerts should be $60 or $70 each,” explained Herr. Annual tickets are currently $40 for six concerts with student tickets at $15.

The Watertown Concert Association works with Allied Concert Services to review and select each season’s concerts. With the Way/Marghab gifts in mind, Herr said, “We go into the process not having to worry about cost. We can get the best.”

WCA board members typically spend several hours mulling over the possible concerts and aim to get a variety so at least one or two concerts will appeal to nearly everyone. Concerts have ranged from brass, including Doc Severinsen, string quintets to vocal groups and even the Church Basement Ladies. A Russian Choir was a crowd favorite as are classical pianists – which were the Ways’ favorite.

“It’s easy to take things for granted,” Herr said. “The Ways and Vera deserve a big thank you.”

“We’re out here in South Dakota – the ‘sticks’ to some people,” commented WCA board member Sharon Rishoi. “We need to be exposed to the arts – creative, cultural and educational.” The Ways’ gifts are helping to provide that exposure. “Whether the townspeople know it or not, it’s an awesome thing for them.”

In addition to supporting the Watertown Concert Association, the Ways’ and Marghab funds at the Foundation also support Town Players, educational and other initiatives that promote a better quality of life in Watertown.

“They were really quite visionary, not only with their love for the arts and Watertown, but philanthropically,” said Jan DeBerg, WCF executive director. “Their funds at the Foundation will support their passions forever.”

Some believe Mr. Way himself played piano – at least in his younger days. People who remember Mr. Way, remember him fondly and know he had a rhythm all his own.  You knew what time it was by merely watching him. Mr. Way was always on time, whether it was to schedule the next day’s Public Opinion newspaper, wish someone “Happy Birthday,” or make his daily walks to the bank or Post Office. And he did all of the above with unwaivering cheerfulness…perhaps the spring in his step had to do with the song in his heart. 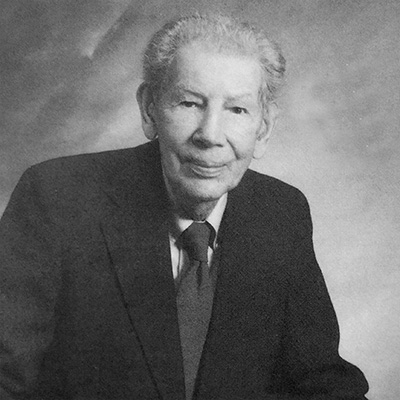