She is 97 years young and never wears black. She thinks that black is too depressing.

Velma regularly visits Jenkins Nursing Home residents. “I know I get as much out of it as they do,” she says. Her mother had lived at Jenkins for five months before passing away. Velma says she and her dad visited her mother every day. “I was never very outgoing. I learned from my dad.” Velma said he would never pass anyone up without a smile, kind word or hand shake.

Velma is very independent. She just quit driving three years ago. “My parents taught me to take care of myself,” she said. Macular degeneration is beginning to slow her down. She loves reading the newspaper and correspondence from friends but reading has become a difficult task.

Velma believes your attitude has a lot to do with how good your life is.

Over the years she has stitched a lot of beautiful needlework which complements her home.

Though her eyesight is failing, she, no doubt, knows the quotes embellished by her handiwork by heart. One framed piece, says “You make a living by what you get. You make a life by what you give.”

It always helps to have a good start in your quest for success. That start may come from your upbringing, your attitude, a helping hand or all of the above.

Take it from someone who knows. “They wanted me to get an education,” says Velma Vincent of her parents. “They were middle class, hard working and succeeded in all accounts.”

Velma remembers her parents and their encouragement fondly. She graduated from Watertown High School in 1930, and then worked in Watertown for several years. She later went to college in Kansas City graduating there and working for 25 years in a Kentucky college before moving back to Watertown in 1974 to care for her mother.

Velma credits her parents with her good start and she wanted to honor them while giving others a start, too. She set up the Jesse D. and Jessie E. Vincent Memorial Scholarship Fund at the Watertown Community Foundation 25 years ago.

Many good starts and successes have happened ever since.

“The scholarship meant a lot to us for the simple reason that I’m a brick layer,” said Gary Ploof. With the help of scholarships, loans, and no doubt, a lot of hard work, Ploof’s son, Sean, graduated from Creighton University in Omaha, NE and is now doing a six-year residency with the Wake Forest University Baptist Medical Center in North Carolina. “It got him on his way,” said Mr. Ploof.

JoAnne (Lamb) Paulson received the scholarship in 1992. She obtained a community health education degree from Mankato State University. “I had lots of different thoughts of what I wanted to do when I grew up,” Paulson recalled her high school years. “You don’t always know where the path will take you. But even if you don’t know exactly what you want to do right away, taking a step in education gets you started. Scholarships gave me opportunities. We didn’t have a lot of financial assets. I worked through college and received grants and scholarships when I could to make it through.”

Paulson is the Public Health Regional Manager for the SD Health Department here in Watertown.

Kathi (Algard) Brandt was the 1994 recipient. The Vincent and other scholarships led her to the College of St. Benedict in Minnesota. “I wouldn’t have been able to go onto college without the scholarships,” Brandt says. “I needed that extra bit of help.” Brandt lives near St. Cloud, MN, and does legal research as a business analyst for a software company.

Like many recipients, Brandt knows a scholarship is about more than the dollars. It really is a start that can lead you anywhere. There should be more people like Velma, Brandt said. “She is empowering people.”

A bittersweet success was that of the 1997 scholarship recipient Carrie (Belatti) Griffin. She received her master’s in speech pathology and was employed with the Watertown School District when she suddenly passed away three years ago from Crohn’s and Colitis. Her mother Bonnie told the Foundation that the scholarship, as well as education, was very important to Carrie. “We always encouraged further education with all four of our children,” Mrs. Belatti said. “We aren’t wealthy people, so it was important to her to have that help.”

Tom Mattingly received the 2002 scholarship. He currently teaches at Watertown High School. “For me, the true impact of the Vincent Memorial Scholarship was not fully realized until the start of this past school year,” Tom shared. “Starting my first year as Social Studies teacher at Watertown High School, I received a letter from Velma Vincent congratulating me on the new teaching position. Her letter was a prime example of her caring attitude for the future of students in Watertown, which has been evident with her generous donations offered to others through the Vincent scholarship over the years. I look forward to being part of the culture in Watertown Velma takes pride in and want to thank her for helping me obtain my educational goals.”

The list goes on through many more starts and successes. So far, there have been 20 scholarships awarded from the Jesse D. and Jessie E. Vincent Memorial Scholarship Fund.

The most recent recipient is Heather Weber. She is off to her own good start just finishing her first year in nursing courses at SD State University.

Though it wasn’t always easy, Velma looks back on her 97 years with gratitude. “I had a good life,” she says. “Sometimes you get down in the dumps,” she explained her failing eyesight due to macular degeneration.  “That’s when you have to pinch yourself because really you’ve had it so good.” Encouraging parents, an education, a good job and an opportunity to give back…Velma has experienced it all.

“I wanted to help people get started because I had the feeling they could see what they can do with a start.” 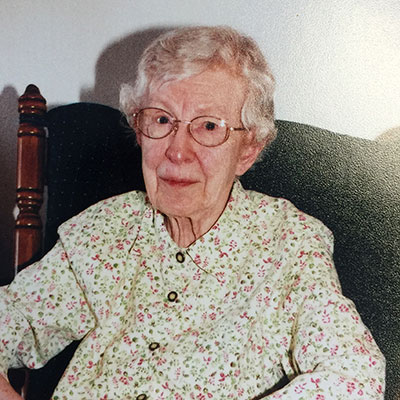