A good coach can make all the difference in the big game, the closest competition… or in life.

There is now a new scholarship fund at the Watertown Area Community Foundation that celebrates that. Wayne Arnold Keup was a member of the Watertown High School speech and debate national championship team of 1965 and 1965 WHS graduate. After passing away at age 73 this spring, his family established the Wayne Arnold Keup & Donus Roberts Speech and Debate Scholarship Fund at WACF.

Though Wayne’s kids have never met the retired Watertown speech and debate coach Donus, they knew the impact he had on their dad’s life for the simple fact that Wayne told them. “Dad was very lucky to have Donus as a mentor,” said Wayne’s daughter Heidi Keup. “We never met him but always heard a lot about him. “

“Donus and debate focused dad’s drive and ambition,” added Wayne’s son Chris Keup. “That, in turn, led to other opportunities…” Boys State Governor, the US Navy, college, law school, DC… “Debate and how he excelled in it made the path forward for him.”

“Once Wayne left Watertown, he returned from time to time for a visit or a class reunion, and Watertown and South Dakota were always a big part of who he was as was his time in debate,” said Heidi. “When we came up with the idea for the scholarship, we knew it would have been what he wanted. We wanted to put their names together on the scholarship to honor both of them.”

After all, Wayne and Roberts were still a “team.”

The two stayed in touch over the years no matter where the accomplished Wayne landed. “I’m appreciative of the good relationship I had with Wayne,” Roberts began, stating that he was both honored and surprised to share the scholarship’s title with Wayne.

“We hit it off. He was a special kid to me. ‘Just give me a chance, coach,’” Roberts remembered young Wayne’s enthusiasm. “Once he committed, he was brilliant,” Roberts continued. “As a freshman he couldn’t make the honor roll, but as a senior he was the Davis Award Winner.”

Wayne’s enthusiasm and drive continued. Wayne was the first in his family to attend college. He did so on a Navy ROTC scholarship (as well as speech and debate scholarship) to the University of Southern California.  From law school to practicing law to marrying his wife Paula and raising a family… Watertown, South Dakota, remained a part of it all.

“Even though he practiced in prominent law firms in Washington, DC, he never lost his Watertown, SD, roots,” Wayne’s family continued. “A lot of people would ask him where he came from and he would say ‘from the best debate team in the nation!’ He would also say, the best education he ever had was at Watertown High School.”

A national competition goes a long way to build a person’s confidence whether you are a coach or a contestant, echoed Roberts. Wayne, he remembered, excelled in other ways even when he had bad luck. “As a senior in extemporaneous speaking I figured Wayne could win the national title, but he came down with mononucleosis in the middle of the tournament. I know he could have won it. I was crushed. But instead of telling him that the sun would come up tomorrow, he was telling me that. Wayne said, ’Coach, maybe I would have. Maybe I wouldn’t have – the important thing is that I know how to do it.’”

Decades of Wayne’s successes proved that and Roberts continued to be proud of him.

“We kept track of each other,” Roberts said. We would get a blizzard here in South Dakota and sure enough I would get an email from Wayne asking me why I still live here. “Wayne always talked about the fun things we would do when he retired. Unfortunately, that didn’t get to happen.”

Perhaps a scholarship to young and enthusiastic speech and debate students like Wayne will be a good consolation.

“Our dad would get a kick out of having his name and Donus’ linked in this way and we know he would be delighted to help other outstanding Watertown debaters pursue higher education,” said Chris and Heidi.

As for Wayne and Roberts, the Wayne Arnold Keup and Donus Roberts Speech and Debate Scholarship Fund has brought a special 60+ -year bond full circle. “There are people who teach you what teamwork is all about – sometimes more than you teach them,” Roberts said. 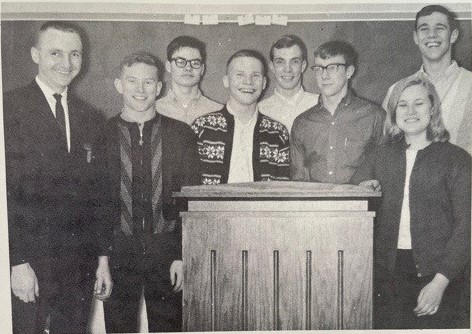