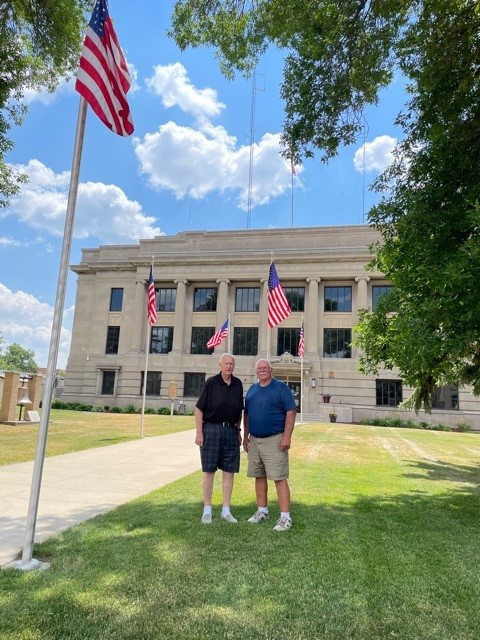 Being patriotic comes naturally for some people.

Thankfully, there are some who even feel it’s their duty to encourage patriotism. Such is the case with the Sons of Veterans, a local group that was formed in 1917 with a $2,900 promissory note and $60 in cash.

Sons of Veterans’ members were sons and grandsons of soldiers of the Army of the United States, otherwise known as the Union Army that engaged in the Civil War or War of the Rebellion. Members came and went over the years, many of them passing on. At present, two remain: Dale Christensen and Randy Rakness, who became members in 1998, the same year in which J. Maurice Redmond and Kenneth Johnson (both deceased) resigned after 30 years of service.

“Maury was a great patriot,” Rakness reminisced. “When Dale and I got into it, I remember Maury saying how it was absolutely paramount that we promote patriotism,” he said. “If a school didn’t have a flag or needed anew one, we would get them one.”

Through the years, the Sons of Veterans provided flags and more to schools, cemeteries, the Codington County Courthouse, American Legion Post 17, the airport… the list goes on. They also assisted with things like the Vietnam Wall, the Veterans Memorial at City Park, and Memorial Day recognition events in Codington County.

We met once a year to determine where our dollars went, Rakness and Christensen said. When fellow member Gordy Osthus passed away earlier this year, the two decided to transfer the organization’s funds to establish the Sons of Veterans Fund at the Watertown Area Community Foundation.

“We had already been thinking about it for two to three years,” commented Christensen. “When Gordy passed away, the timing seemed right,” he said. “We figured getting it into the Foundation’s hands is where it should be now. Hopefully, the fund can spend a couple of hundred dollars on flags each year – that’s what it was intended for.

“It’s a unique account for a unique purpose,” Christensen continued. “I give a lot of credit to the people who set it up.” That was a lot of moneyback then – not many people would have done that, he said.

Fast forward to a time when some schools don’t say the Pledge of Allegiance anymore, Sons of Veterans are among those who never stopped and setting up the fund at the Foundation ensures that.

“A lot of organizations don’t necessarily think about flags in their budget,” Christensen added. “But we took it to heart over the years. Some flags get worn and tattered – we watched that a little bit and knew where flags were needed.”

Delivering those flags to schools and organizations that needed them was part of their purpose, they said. “The flags, themselves, in our hearts, we always thought were important,” Christensen said.

“The biggest thing that sticks in my mind was to influence patriotism in younger kids,” Rakness added. “There should be a flag in every school.”

Whether the Pledge of Allegiance is said or not, a flag is another way to say, “And Liberty For All.”